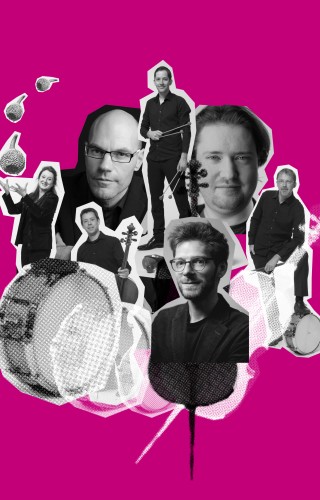 Under the title Bewegungsfreiheit (Freedom of Movement), the œnm leaves the abstract realms of absolute music and enters the sphere of instrumental theater, for almost all of the works offered call for scenic action, and where they do not, they at least evoke a cinema in the mind. “Selisih Baru” for saxophone and cello by Dieter Mack is inspired by a very dissimilar couple existing in real life who nevertheless find common ground. John Cage’s “Living Room Music” turns everyday objects, like those found in a living room, into instruments. Jean-Baptiste Marchand composed “Fear”, a kind of psychogram for saxophone and percussion. Thierry de Mey choreographs a ballet for the hands of three percussionists in “Musique de table”. In Erin Gee’s “Mouthpiece XXIV” the sounds take on fluid qualities through the use of an aquarium, among other things. Meanwhile, a classic of instrumental theater is Mauricio Kagel’s “Match” for two cellos and one percussionist, in which he has blended the spheres of sport and music. All of the musicians involved in the program up to this point are finally united in Tomasz Skweres’ “Leyak”, which refers to a fearsome creature from Balinese mythology and receives its world premiere in this concert.